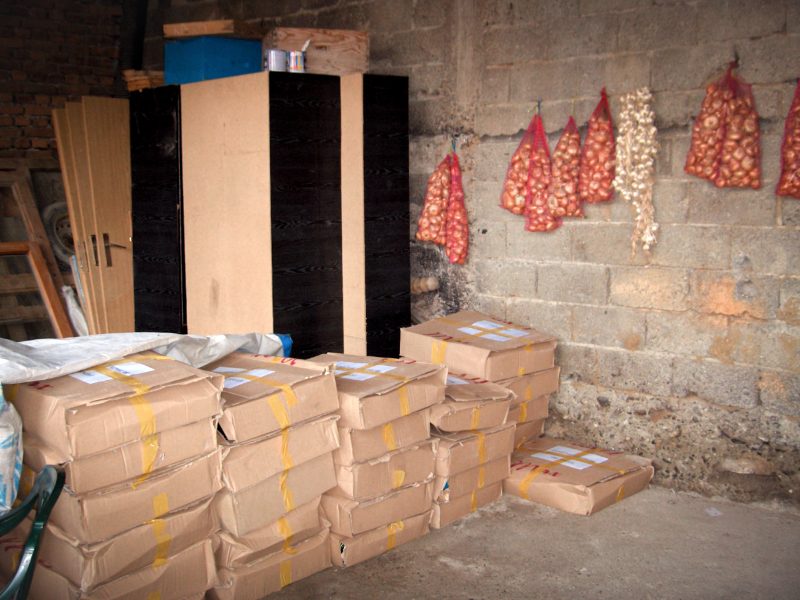 There are the sheer number of civilian deaths and the flow of forcibly displaced people. There is family disintegration, weakening of social networks and breakdown of social services. There are material losses, disruption of social economies, dislocation of food production, and the exodus of the workforce. There are high unemployment rates and low wages; and there is poverty.

People reorient themselves towards one another and towards the influx of strangers – the mercenaries, the peacekeepers, and the aid providers. I observed for years how humanitarian aid with its entourage of experts, volunteers, and adventurers profoundly shape life conditions and possibilities on the ground. Trucks and jeeps, exhibiting the labels of organisations from different parts of the world, appear seemingly out of nowhere in the towns and villages. Men and women, who need assistance in translation, unpack the goods ranging from building materials to household items to clothes. Often they stay around for a while working with the local population to carry out needs-assessments, present business plans or introduce healing techniques for the physical and inner wounds of war.

The distribution of these goods and services follows a logic that is obscure and couched in “virtue ethics.” [1] The logic is characterised by kindness, human dignity, altruism, benevolence and charity, all with the intention of providing aid for victims. The anthropologist Didier Fassin has called this logic “humanitarian reason.” Humanitarian reason, he explains, is driven by the moral dimensions of empathy for the poor and the satisfaction of helping them. It also harbours expectations of the poor – what they are and what they should be, how they behave and how they should behave. Hereby, the inherent assumption is that the deserving poor should be “virtuous” tasked to uphold a morally just social order by being appreciative of the aid and inherently fair and caring toward each other.[2] While such ideals shape expectations and interactions on the ground, they are also imperfect and raise critical questions. What happens under the guise of ideals and virtues? How do people negotiate idealistic expectations and uphold moral order while pursuing their own interest? What does it mean when the deserving poor refuse to be virtuous? I want to shed some light on these questions by turning to my research in Kosovo where I examined the ordinary activities through which village women navigated the humanitarian field in order to change the conditions of their lives.

When the deserving poor refuse to be virtuous

In the immediate aftermath of the Kosovo War, aid poured into the villages with no system in place for distribution. To counteract the unfolding chaos, villagers, together with aid providers, devised bureaucratic mechanisms based on available resources, need and moral sentiment. One such mechanism was “lists of the needy”. Names of widows and orphans were usually placed at the top of the lists, followed by particularly impoverished families who were deemed disadvantaged due to their weak social ties, low-level education, and limited ability to generate income for their families. Thereby, hierarchies of suffering were established to determine who should be helped first.

While the lists brought structure into aid distribution, they also created new gaps and tensions among the village communities. Villagers complained that by automatically equating widowhood with poverty and deservedness, other families living in equally dire circumstances fell between the cracks. Valbona[3] who counted herself among the latter said, in a rather embittered tone, during one of our conversations, “There were several organizations which wanted to help people in need. But they were told that families in need were those who lost the male head of the house. What I want to say is that needy people were without exception war widows.” After a long sigh, she continued, “Nobody looked at our situation. When we returned as refugees from Albania, we hardly received any help just because my husband didn’t die during the war. I am ashamed to say this, but we had to wash ourselves for three years in the outhouse.”

These “lists of the needy” not only created new hierarchies, they also camouflaged existing power dimensions and secondary activities. Existing power dimensions ensured that aid flowed much more smoothly through some family networks than others. Explaining this to me, Shkurta, a mother of three living on a large family compound, lamented: “No one helped us! We had two dead people in our family. We didn’t receive money, we didn’t receive building material, our men didn’t get jobs, nothing.” While her family might not have received much, or indeed anything, this was not the case for all villagers. She said, “There were families who grabbed the help for themselves. The rest of us could only watch what was going on. If you felt like crying, you could cry. Qka me bo?! [What to do?!]” ‘Grabbing the help’ was often linked to secondary and somewhat hidden activities such as trade and barter. Women referred to them as keqpërdorim [misuse] or korruptim [corruption]. Lorida, an energetic and outspoken widow, explained to me, “the help was often misused. It is the truth, Hanna, I could tell it in front of the people!” Raising her voice, she continued, “A lot of families, who didn’t have any damage during the war and had a cow, received another cow. Just like that.” Shrugging her shoulders, she added, “Five years ago my children were very small, I was running after organizations, trying to work, just for some money. I realized that I was not profiting from it and so I quit.”

While some women, like Lorida, could not get ahead, others built careers within this new shadow economy. A case in point were the so-called “mediators” – representatives of groups in need who were called upon as soon as aid arrived to help decide how the goods and services would be distributed. Mediating came with responsibility and sometimes, hard to resist opportunities for profiteering. Irida, a corpulent woman whose tight brown curls framed the soft features of her face, recalled an incident in which a women’s organisation had intended to provide impoverished families with 200 euros. Her name had been on the list; but, like all listed women, she received only 10 euros. Laughing cynically as she remembered the bizarre situation, she said, “A few days later, someone from the organization stopped by and wanted to know how I appreciated the generous help of 200 euros. I just looked at the person in surprise.”

Irida’s story was not exceptional. I heard about, and witnessed, many other similar situations involving beehives, computers for children, an ajvar machine, tarps for greenhouses, and income generating jobs – all partially distributed or concentrated in just a few social networks, leaving others who were equally in need, empty handed. While such acts might seem objectionable and morally questionable at first glance, I want to take a step back in an attempt to understand them within the wider humanitarian context where such acts might be necessary or possibly adequate and realistic. Further, I will show that these acts say less about the aid recipients, their character and their deeds and more about the nature and flaws of humanitarian aid itself.

Humanitarianism and its failure to imagine a good life

While humanitarianism is an ideal, it is never straightforward in practice. The examples above have made apparent that it merges seemingly contradictory and even incommensurate values and practices. It adeptly intertwines solidarity, charity and fairness with inequities, opportunism, and trade. Within this context, I argue, acts like keqpërdorim and korruptim belong to the same logic as notions of benevolence and altruism.

Although these tensions form an inherent part of “humanitarian reason”, they are rarely openly acknowledged despite the fact that they are widely known. Rather, such “uncomfortable knowledge”[4] is bracketed from public discourses, as it is perceived to contradict humanitarian ideals and to destabilise processes that govern the delivery of aid to individuals and communities in need. Instead, it is traded in hushed tones, like open secrets, between aid providers, aid recipients, and ‘onlookers’ who watch the humanitarian scenarios unfold in their midst. The reasons for this are twofold. First, by turning uncomfortable knowledge into an open secret it gains in value for potential aid recipients. It can be traded in for job opportunities and access to resources and may be used as a means of social control to keep others from benefitting too much from aid through blame and blackmail. Second, it allows aid providers to disguise the flaws of the humanitarian aid apparatus by blaming a few ‘bad apples’ for impeding the success of the humanitarian operation. Yet, instead of rooting them out, aid providers take the moral high ground by talking about acts like keqpërdorim and korruptim as thankless acts in the face of superior humanitarian values of generosity, charity and benevolence.

The reason for taking the moral high ground instead of punitive action is that everyone involved knows deep down that keqpërdorim and korruptim are not in fact ‘thankless acts’, but expressions of frustration. The frustration of having to appear thankful, deserving, and virtuous for aid that is nothing more than a ‘band aid’ over a bullet wound. And this is for aid that consists of 200 euros here and there, a few beehives, some tarp, second-hand computers, and the like. No one can possibly argue that such gestures of benevolence have the power to make a profound difference in people’s lives. Instead, they are a failure of imagination – a failure to imagine what a good, dignified and flourishing life could look like. Consequently, it would be wrong to think of misuse and everyday corruption as purely self-interested and unreasonable. They are also adequate, realistic, and productive responses. What I want to say here is that, it is thanks to, and not despite, these actions that aid recipients create social change that the aid apparatus itself is incapable of achieving. It is through such productivity that people generate opportunities, disrupt gender boundaries, propel women into positions of leadership, create new business ideas (which were clearly not intended by whoever donated the goods), and build new relationships and networks between variously positioned people. Put differently, by repurposing the limited goods of aid and building new relationships, new spaces of potentiality[5] and new possibilities for life emerge among communities in need.

To read more stories on my blog: SymptomSpeak

[3] All names are pseudonyms