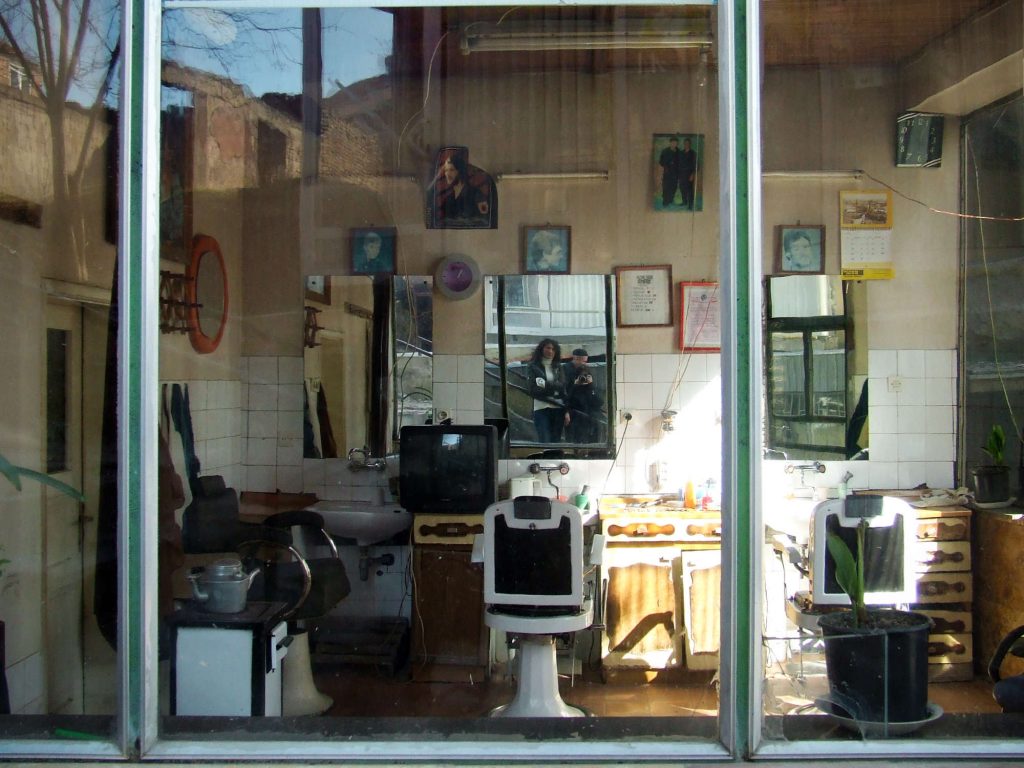 Therapeutic practice exposed society in its many facets to health practitioners providing treatment to women survivors of the Kosovo War. Like a mirror, it provided an image of an alternative reality reflecting in waves societal concerns, not clearly visible because of obstruction. Lurking in blind angles, in dead corners, it made practitioners doubt, feel uneasy and bewildered about the world around them.

Mirroring occurred as practitioners listened to their patients’ stories, attended to their pains, contemplated diagnoses and offered care. It made them realise that the women’s illnesses were much more than mental disorders. Rather, they were powerful reflectors of their country’s dis-ordered state in the post-war period. A state characterised by political, economic and social struggles playing out in a context marred by violence, inequality and uncertainty. In a context where people embraced hope and novel opportunities all the while experiencing living-on as painful, requiring endurance and hard corporeal labour.

Practitioners described the dis-ordered states of women’s bodies and minds first and foremost as traceable proof of Serbian war-crimes. They reflected into the present past killings, experiences of torture and abuse, expulsion and refuge, disappeared family members and friends, and destruction of property and livestock. A village doctor told me, as he leafed through his handwritten patient register,

Usually my patients complain about headaches, stomach pain, dizziness, and nonspecific bodily pain. Others tell me that they cannot sleep. Usually I come to the conclusion that these problems are related to war and experiences of violence; they are psychosomatic.

A social worker, in turn, asked me to try to empathise with her patients’ plight to get a better feel for the enormity of their pain and suffering. She said,

Just imagine how you would feel if you had lost your children in such a brutal way. It would be completely normal for you to experience symptoms of physical and emotional pain.

Being thus exposed to the reflections of the women’s suffering and pain led practitioners to go beyond giving clinical diagnoses of post-traumatic stress disorder, depression and anxiety. It led them to take a political stance. They blamed Serbia for war crimes that played out in their patients’ bodies while emphasising their own country’s sacrifice and innocence. In clinical settings I was told, “we are unable to forgive and forget,” “we demand justice,” “we call for cutting all political and economic ties with Serbia,” and, ultimately, “we fight for our country’s self-determination and independence.”

While such patriotic illness talk was socially acceptable, the therapeutic looking glass also brought uncomfortable and not directly visible truths to the fore. Truths that were obstructed by those in power as they questioned the ways in which the newly independent state was governed. Invisibilised truths of this sort highlighted shady deals, greed and corruption, and socially sanctioned discrimination and marginalisation. Making such realities perceptible was not straightforward. One risked being labelled a traitor: someone who threatened to tarnish the country’s reputation, question the legitimacy of independence, undermine the quest for reparations, and to disrespect those who had sacrificed their lives for collective freedom.

It was, thus, only cautiously that practitioners told me about how corruption by state and community leaders stunted the fragile economy, keeping people in poverty unless they partook in, what was referred to as, keqpërdor or korruptim. Resulting uncertainty, hardship and lack of control over one’s life were believed to layer on top of war traumas increasing experiences of distress and the worsening of women’s health.

As we were drinking our macchiatos in a bustling Prishtina café, a psychologist remarked in a hushed tone,

Lack of perspective and a sense of being stuck were not merely felt in relation to international visa politics. Practitioners connected them explicitly to internal political mismanagement, blaming it for their country’s high unemployment rate, low salaries and lack of infrastructure. A doctor explained,

When [my female patients compare] their own living conditions to what they see on television, [they] think about barriers like unemployment, low salaries, and lack of electricity which keep them from succeeding. They feel handicapped and dissatisfied.

Similarly, a psychology student reflected on the ways in which public policy blocked, not only Kosovo’s economic development, but also the country’s social wellbeing and, connected to this, people’s health. Using the malfunctioning and underfunded pension system as an example, she said,

If a place is economically doing well, health is good too. But take our pension situation in Kosovo. Women and men worked hard for many years and now they just receive 40 Euro as pension. 40 Euro, my God, what do you do with that? Buy bread to eat with salt? Or buy pills because you are old? If we would overcome this, our health would be better.

Feeling “handicapped and dissatisfied” were considered not just individual experiences, but collective ones playing out in family networks and the wider community. Practitioners reasoned, for example, that men’s unemployment and related inability to economically provide for their families increased their female patients’ vulnerability. Men suffering from traumë and papunësia (unemployment) were described as short tempered and prone to take their frustrations out on their wives and children exposing them to physical and emotional abuse. Yet, support was difficult to provide as everyday family violence was largely conceived as a private matter rather than a legal or medical one. Doctors felt they could do little more than dressing the wounds, setting the bones, and offering spaces to talk if those affected dared to do so.

The looking glass thus revealed tangled historical, societal and personal truths, which, like optical illusions were impossible to unsee once discovered. What was revealed was a very different image from that which Kosovo’s post-war society had wanted reality to look like. After years of fighting for independence and a sovereign governed state that was expected to provide security and opportunities for communities to flourish, a different reality had emerged. This new reality made societal ills apparent and clearly showed how opportunities to flourish were mostly reserved for the educated elite based in urban centers. In this new reality the vast majority of people struggled to make ends meet, to find work, to secure adequate housing, and to educate their children. The resulting distress experienced by people added insult to injury. A general practitioner said, for example, “Each additional stressor leaves an emotional mark and enhances feelings of stress” while a psychiatrist explained, “All these traumas [both war traumas and everyday hardships] accumulate and build layer upon layer upon layer upon layer which result in psychosomatic symptoms.”

By viewing present-day stressors of economic hardship and domestic violence as layers piling up on underlying war-traumas, practitioners rendered the uncomfortable truths, which the therapeutic mirror had revealed, as socially acceptable. I was told, “Women often blame their economic situation for their health problem while I believe that it is a valve through which they can express war traumas” and that “War traumas [rather than the current socio-political situation] seem to underlie and define these experiences.” By giving war experiences primacy in their accounts, health providers effectively reinforced women’s victim status, reinstated “trauma” as a central category, and reinvigorated patriotic illness talk.

Yet, when contemplating effective treatment for mental distress and avoidable physical health problems, practitioners could not escape the present-day struggles, economic hardship and social discrimination that the therapeutic mirror threw back at them. They were caught in a web of conflicting values, emotions, knowledges and uncertainties within which they could do little more than to act in frustratingly small increments. That is, the layered reflections filled health practitioners simultaneously with motivation and trepidation. Unable to unsee how intertwined societal ills affected their patients’ mental health, they felt compelled to intervene on more than just a medical level while equally being fully aware of their powerlessness and lack of societal influence to bring about meaningful change. The mirror was, thus, as much enlightening as it was a curse in a context marred by scarce resources and politics that rendered fundamental critique impossible out of a fear that it would jeopardise the road to national self-determination and freedom.

racing of the heart